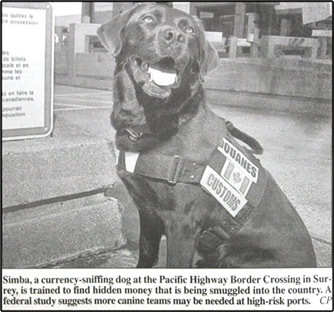 OTTAWA (CP) A federal study says smugglers may be switching tactics to take the bite out of their four-legged opponents –canny canines that sniff for illicit drugs plants and currency.

An evaluation of the national detector
dog program says the initiative might be prompting criminals to mask the scent of their contraband or simply avoid ports
where the animals work.
The study also found that while the pooches are efficient members of Canada’s border units, more dog teams may be needed and the government should ensure they are optimally located.

“There is currently no overall risk framework to determine the placement of the detector dog teams.” the report says. The evaluation. completed in December by the Canada Border Services Agency,
recommends an annual assessment be carried out to ensure “maximum coverage” of dog teams at high-risk ports.

The border agency has 69 detector dog Teams, each composed of a canine and handler, working in marine, air. postal and land ports at an annual cost of $6 million. The capacity of dogs’ brains to process
smells is 40 times greater than that of humans. Labrador retrievers and Beagles are the breeds of choice.

Forty-six dogs focus on drugs and firearms . 19 seek out illicit food, plants and animals and four sniff for smuggled currency.

The study says that while seizures fluctuate year to year, one explanation for the dip is that two of the four currency detector teams were out of service for five months in 2005.

“It is also possible that money launderers are aware of CBSA use of detector dogs and have moved their smuggling activities to another ports” – a perception supported by dog handlers.